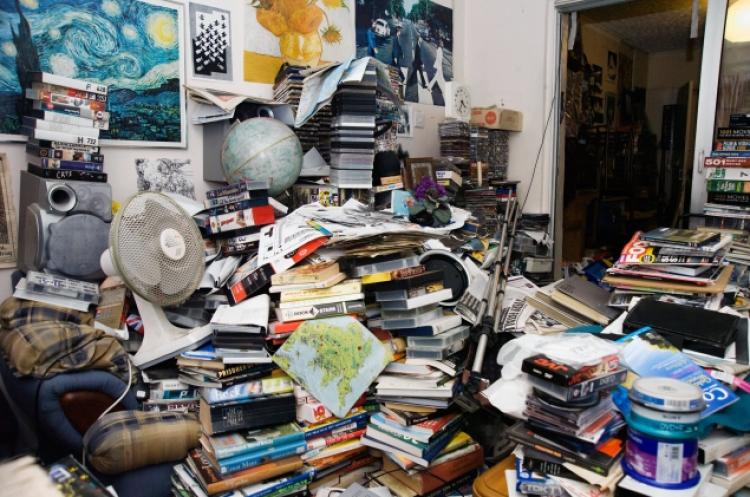 Last weekend, Craig flew to New York for a quick visit with his brother. He left bragging about the fact that he’d only packed a T-shirt and a pair of undies in his backpack. I think he brought a toothbrush too. He is a big fan of travelling light.

I also am a big fan of travelling, but sometimes have difficulty with the light part. Despite the many items that I may accumulate in my luggage on any given trip, for me one of the best aspects of extended travel is taking an extended break from one’s possessions. You move from place to place with all your worldly goods in little contained units, and it becomes pretty easy to forget about all the other crap that you own elsewhere in the world, like your basement, or even worse, your parents’  basement.

When I was quite a bit younger than I am now, I returned home from a half year overseas, and being a bit at loose ends, I allowed my father to cajole me into helping with a family project that was in the works. Sadly, while I was away, one of my dad’s two aunts had passed away, and the other had moved into long-term care. The result was that their house needed to be tidied up and sold, with all of their possessions disposed of.

A word about my great-aunties: they were two lovely old women who were both unmarried and childless, and so continued to reside together for the whole of their lives. In my childhood memories, their tiny house in North York was a treasure trove of interesting antiquities, but so rammed with things it was difficult to move. They had once shared that house with their mother, and so had inherited all of the items she and her forebears had ever owned, whilst continually collecting their own.

At one point in the 90’s, the two were forced to move from that location, and so found a larger bungalow not too far away. Family members tried to prune, so to speak, but my aunts were determinedly attached to their stuff, and the absolute majority of it made the move with them. So I found myself, at the age of 24, spending depressing days in their unlived-in house, trying to figure out what to chuck, keep, or sell of several lifetime’s worth of effects. I found I couldn’t see the forest for the trees, and was constantly getting bogged down in minor details like whether or not this antique stick-pin was worth anything. It was a massive project, but eventually we managed to unload all of the china, jewellery, furniture and miscellaneous other that filled the house.

And I could walk away with my youth, vowing that I would never, ever live like that or let my stuff get the best of me.

Which is why it pains me to make this confession: I’m a hoarder.

No, not like the TV-show hoarders that have tunnels through mountains of old magazines to their bedrooms. If you visited my house you’d probably think, “This place is quite tidy, it’s obvious a hoarder doesn’t live here.”

You would be wrong, though. Because I’m the worst kind – a secret hoarder. We have a half-finished loft space in our attic which has become the final resting place of every thing we’ve ever owned that I don’t know what to do with. It’s pretty crazy up there. As much as I’d like my husband to also take the blame, in all fairness to him, this isn’t his problem. I’m the one who created it. I am the gatekeeper/purchaser of all of the kidstuff that comes into our abode. If Craig had his way, he’d just chuck out all of our children’s toys and live in a white box with spartan surfaces and unblemished walls. The kids could wear utilitarian jumpsuits and we’d all be happy.

If you’re thinking this sounds familiar coming from me, it’s because I’ve blogged about this before. More than three years ago! Have things improved in my hidden hoarder’s lair? Changed? One thing that has changed is that we now have one more child and the accompanying clothes, toys and artwork cluttering up the place. But otherwise, no.

By now, everyone and their mother has read Marie Kondo’s magical manifesto of Japanese tidiness or whatever that book is called. I borrowed it from a friend last year and gave it a skim. I’m not an absolute convert to the cause, but admittedly, there were some gems in there. Kondo is an advocate of not organizing your stuff, but just going full-on minimalist. She says (in case you’ve somehow missed this) that you should hold each item you own and see if it “sparks joy” in you. If it doesn’t, it must go. Even if your deceased grandmother gave it to you.

This idea has started to make a lot of sense to me. I’ve just been finding lately – maybe always – that the owning of too much crap drags me down mentally. We don’t have much storage space, and every closet and shelf is bursting at the seams. We also have many things in the house that are linked, emotionally, to Gavin’s illness, whether they be medical documents, supplies or things that were given to him in hospital. I don’t know what to do with these things, but when I hold them they certainly don’t spark joy. They do whatever the opposite of sparking joy is. Trust me, it’s not a good feeling.

A few weeks back, I convinced Craig that it would be a good idea to paint our kitchen. Ourselves. We are not handy, and like busy parents everywhere, have none too much time on our hands. The project went on for a bit longer than projected, but we now have a white-blue kitchen instead of dusty old yellow. It looks amazing. In the process, we took down all the things that had made their way onto the walls over the years, and then put very few of them back up. We’ve both been looking around at these spare, clean surfaces and feeling that minimalism is good.

That set in motion a big clothing, book and toy purge too. With the spectre of my aunties’s house looming over me, I’ve decided to get rid of everything. I want to live in an environment that feels consciously curated rather than unconsciously cluttered.