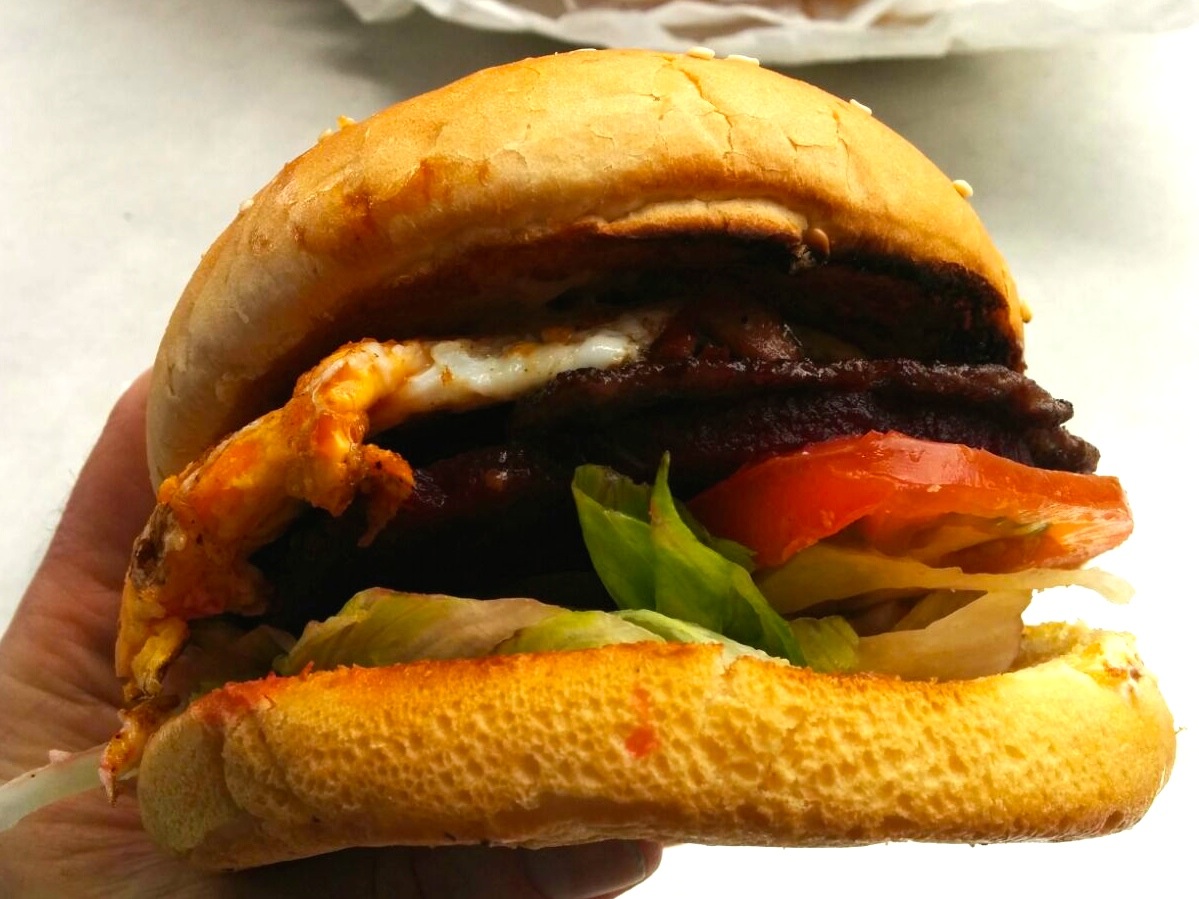 Long ago when we were wild young things, my husband and I went travelling in Peru. One evening, we were eating dinner in a restaurant on the shores of Lake Titicaca. It sounds rather more exotic than it was. We were with a group of travellers that we’d fallen in with. We ordered the fish, as almost everyone did, with the promise that it was fresh-caught daily. We were all served identical-looking plates, with a breaded slice of something on it. Craig took a bite of his food and a weird look flitted across his face.“Taste this,” he said. So I did. It tasted like chicken.“Is that chicken?” he said. I said I thought it was. He grimaced and put down his knife and fork.
He could be forgiven for being unable to identify it, because at that point he hadn’t had a bite of chicken in over ten years. He was a staunch vegetarian, you see, only eating the occasional bit of fish for variety.I flagged down the waiter and pointed at the offending flesh.“Es pollo?” I asked in my limited Spanish.

I indicated that my partner had ordered pescado. The waiter explained with a cheeky grin that they had run out of pescado, so they’d just decided to serve him pollo instead. Obviously, this meal switcheroo wouldn’t fly in a restaurant here at home, but this was small-town Peru, so we wordlessly switched plates and I ate pollo for dinner. My own vegetarianism was not nearly so staunch.

In fact, I often found being vegetarian draining and tiresome, especially when travelling. I’d done one trip through Turkey and eastern Europe sans meat, and had then sworn off vegetarian travel forever because of the amount of difficulty it engendered in communicating with the locals.

At home it was a different story. For many years, we cooked and ate exclusively vegetarian meals in our house.

You may note my continued use of the simple past tense, was, cooked, etc. This is because my husband recently fell off the vegetarian carrot-cart with a thud. After roughly 20 years in which he ate no meat whatsoever, (apart from that nibble of bird in Peru) he quite suddenly decided that he was going to take up eating meat again.

I can hear the gasps of horror from here. What?! Why would he do that? We as a culture like to hold people to their promises, as though to a sworn blood-oath. Unfortunately, saying, “I’m vegetarian” is akin to stating that you will never, ever, ever eat meat again, not one bite. A dear friend has been a practicing vegetarian for about 20 years also. I’ll never forget though, when she was first struggling to adapt to that new way of life, she took a bite of bacon – once! – when we were out for breakfast with a group of friends.

“She’s not vegetarian,” one of our friends said snidely later on. “I saw her eating bacon!” The scorn. The outrage! Bacon of all things!! Vegetarians, it seems, are to be held to a higher standard than meat-eaters, who can happily down a Double Down if they so choose, without guilt or, apparently, shame for their gluttonous impulses.

I’m sure many of us recall too, the Internet reaction to vegan chef Alex Jamieson outing herself after she secretly returned to eating meat.

That’s part of the reason that I long ago gave up calling myself vegetarian. I didn’t like to draw attention to myself at meals out with friends or family dinners, so I ate meat as a sometimes food. I’m not going to lie, I enjoyed it, too. But Craig’s vegetarianism kept me on track at home, and I felt like I had a pretty good balance going on.

Over the last few years though, we’ve both started to suffer from what I’ve decided to call Vegetarian Fatigue. This is a pretty common disorder amongst the vegan/vegetarian set. Many of my friends and family have felt the need to come back to the Dark Side after a certain number of meatless years.

It’s not difficult to understand. Vegetarian Fatigue is just what it sounds like: you become tired. You’ve had enough. You’ve had enough of scanning menus for the crappy pasta primavera or garden salad, knowing that 80% of what is on offer is not for you. You suffer awkwardness at friends’ houses when you have to tell them that you don’t eat meat, and they have just offered you a meatball. You endure the quizzical, “So what do vegetarians eat for dinner anyway?” and you respond with, “Oh, you know, beans and rice… and stuff.”

Many vegetarians, after a number of years, develop actual fatigue related to too many iron-deficient meals. I’m not saying that all do, or that it’s not possible to meet your nutritional requirements with a plant-based diet. Certainly it is. But honestly, it ain’t easy.

But this is about us, not those perfect vegans out there.

What we have found over the last few years, is that we’ve had a lot of difficulty concocting meals that our picky child would eat. Many vegetarian meals involve vast amounts of chopped vegetables, mixed together in stewy sauces. Just the kind of the thing my child abhors. (The peas and carrots are touching on the plate!!) Zippy stir-frys had become a thing of the past. Big salads as a meal were also out. Ditto lentil bowls. Our protein sources were dwindling fast, and the meal repertoire seemed stale and repetitive.

On top of the extreme pickiness, Bean basically didn’t eat meat anyway. Because of the holy hell of his health situation, he had stopped before the age of 2 and never really started again. It’s one thing for an adult to consciously stop eating meat. An adult eats their lentils and leafy greens con gusto. My kid doesn’t touch leafy greens with a proverbial ten-foot pole, let alone a fork. Our meals had become basic in the extreme.

On occasion, I would purchase a meat product for the kid to trial. Bacon was a hit. The gateway meat! Chicken was not. We suspected that his health and energy would improve if eating meat became a more common part of his routine, but experimenting was expensive and time-consuming, as whoever was preparing dinner still had to put together both a carnivorous and plant-based version of the meal.

Of course, eating meat raises a lot of moral and ethical questions. Is eating meat inherently cruel? The obvious answer to that is yes. The act of killing animals in order to eat them is an act of cruelty, which we either accept as one of the necessities of being omnivorous humans, or we don’t. Another stumper is this: With the environmental consequences of meat production, shouldn’t we all just stop eating meat altogether? There are many who would answer, undoubtedly, yes. Personally, I feel that the answer is more like, it’s very complicated.

My major concern is that I want to be aware of where the meat I’m eating is sourced from. What conditions were the animals raised in? What were they fed? Were they given antibiotics or growth hormone? These are all points that directly impact the human who consumes the animal at the other end of the production chain. But, as Jonathan Safran Foer pointed out in Eating Animals, it’s difficult to walk that middle line of only eating certain, difficult-to-find meats, such as grass-fed beef or organic free-range chicken. I mean, do you ask your host where their sausages came from, and then turn up your nose? Like many things, it’s a slippery slope from the free range down to the dirty bacon they’re plating at your local greasy spoon.

The thing is, we know. We know about the factory farms, environmental impacts, and horrendous slaughtering methods. We know about the widespread use of antibiotics, and the imbalance of Omega-3 and Omega-6 in our meats. We know about the implications in human health because of this. Long before Cowspiracy was making waves, we had read all the books and seen all the documentaries. We were appropriately horrified, and – I admit it – self-satisfied.

Knowing all of this, how can we continue eating meat in good conscience? The answer to that is, well, we’re human. Don’t we all engage in behaviour which isn’t necessarily good for us, or the environment?

We’re definitely on a bit of a meat-eating jag. The husband more so than me. Over the past months, I’ve watched, bemused, as he returned from the butcher’s laden with flank steak and bison burgers. He’s tried his hand at cheffing up lamb shanks and schnitzel, dishes I never would’ve thought to attempt. He’s texted me photos of crazy burgers he’s consumed around the city. He’s snapped his menu shut and said, “Right, I’m having the filet mignon!” Words that have made me think, Who are you and what did you do with the man I married?

In his defence, we are trying to be conscious too. We found a local farm that delivers. We get a small weekly delivery of various meats, all of which have been raised ethically and sustainably. (See: The Stubborn Farmer) If we purchase other meats, we try to do our best. Eating out still poses some problems.

I don’t doubt that eventually we’ll even out, and tip back to the mostly vegetarian side. For the moment though, we’re about to purchase our first barbecue. Fire up the grill, summer’s coming.