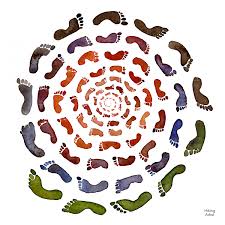 The other night, I was walking out of my garage into our back lane, when I ran into my neighbour, coming out of his garage.

I had Lark in the carrier, as I often do.

“I didn’t know you guys walked”, he said, joking.

“Sorry?” I said, startled. Unable to hide my defensive tone, I said, “Only every day.”

He quickly changed the subject and we parted amicably. But I was, shall we say, nettled. As happens so often when we have an emotional reaction to something, I couldn’t quite figure out why I was so irritated.

We live in a neighbourhood that rates a 91 on Walk Score. This means that you can do all of your daily errands and shopping on foot. All schools, shops, and restaurants are within easy walking distance.

Let me also add, that this particular person and his family do not own a car and pride themselves on getting everywhere on foot, bike or transit. They occasionally rent a car for long journeys.

When Craig and I first bought our house, we took transit to work every day and walked the neighbourhood on weekends, only getting the car out of the garage for road trips or specific errands, like a Home Depot run. This fell in line nicely with our personal beliefs. We were reducing our environmental impact by driving less and transiting more.

After I had my son in 2008, it was a joy to explore our neighbourhood on foot, with epic stroller tours, naps and fun activities to take him to. When he got a little bit older, I bought a Chariot bicycle trailer and began to pull him behind me in the spring of 2010. He loved going for a bike ride and usually fell asleep in the trailer on the way home.

But then he got sick.

Our life, for over a year, was a long series of back and forths to the children’s hospital, often racing the clock in the middle of the night to get to the ER. There was no question of walking, or biking or transit. It was car and car only. As much as I hated it from an environmental standpoint, I accepted the necessity of it. Actually, I remember entering into this curious mental state of “these rules don’t apply to me” as I cut corners and disobeyed traffic laws, all in an attempt to hurry, hurry and get to the next appointment on time. Such is the mindset of one living in a constant state of high alert.

As 5 years have passed from then to now, I’ve attempted to pull back from my incessant car use and retake our former walking lifestyle. It hasn’t been easy. My life with my son continued to be one, long trip to an appointment at hospital or various locales scattered across the city. The emergency scenarios didn’t decrease, and again there were many tense rides to ER with my little buddy listless and pale in the back seat, throwing up.

On most days, I ended up just chucking him in the car when I thought the walk would prove to be too much. After the arrival of Lark last year, this frazzled mama was barely getting out of the house dressed, with kid and newborn in tow, squealing up to morning drop-off with only a moment to spare. Often the open door of the school would close in our faces as the last child trooped in. Which then meant getting the babe out of the car in the -20° weather and marching down to the other end of the school to deliver the kid through the western door. The result of all of this early morning frazz? Ring, ring. Ring, ring. An hour later. “Bean’s not feeling well and throwing up, you’ll have to come collect him.” Baby back in the car. Here we go again!

Here’s the turnaround point. Last March, Bean’s new medication kicked in, which has meant continued wellness for periods of more than one or two weeks. It has meant a huge increase in stamina and general well-being, and less anxiety and stress. He began to be able to walk the 1 km to school without complaint or multiple rest stops. As a result, our behaviour as a family has changed.

With the start of this school year, Bean and I agreed that we would try to walk to school every day, unless there is some compelling reason to take the car. We have stuck to that agreement since September. He has walked to school and then home, and then most often walked to his after-school activities or friends’ houses for playdates. I have been tracking my steps with the Health app on my phone. Each day, I’m walking roughly 5 kilometres, with a daily average of about 8,000 steps. On record days, I’ve clocked over 17,000 steps, or about 12 kilometers. Bean and I have been quite pleased with ourselves for sticking to our pact and leaving the car at home. Naturally, Lark has been along for the ride, either in the stroller or carrier.

You can understand then, maybe, why I was annoyed with my neighbour for his offhand remark.

I guess the problem here is that humans make judgements based on what we see. It’s almost impossible for us to make perceptive calls of other people’s behaviour based on what we don’t see. If, the majority of the time, my neighbour encounters me exiting our house through the garage, then he will assume that I most often drive. He doesn’t see me bumping the stroller down our porch stairs every morning. And, as stated above, we did use to drive pretty much everywhere, so at one point in time, his comment would’ve been accurate. Though, in truth, our reason for driving everywhere was painful.

Unfortunately, for me and the rest of us, we use these kinds of judgement calls all the time. Let’s say, for example, you have a friend who is trying to lose weight. You don’t witness the entire previous month that they have subsisted on kale smoothies, but you do see the big piece of cake, eaten as a treat at the birthday party. Your conclusion? Your friend isn’t working very hard at this so-called diet.

It can be disheartening when we work hard to change a certain behaviour, but our efforts go unrecognized by those around us. This is especially true when dealing with those closest to us, our intimate friends and family members. We like to keep our loved ones in the cozy pigeonholes we’ve crafted for them. As for acquaintances and strangers, we have no problem forming blanket opinions based on a small exchange or observation.

The moral of the story is the trite but true, “Be kind, for everyone you meet is fighting a hard battle.” Sometimes these hard battles shape our behaviours in ways we wish they wouldn’t. We can only be forgiving, and attempt to stretch our brains to imagine the behind-the-scenes story, the battle that we can’t see.