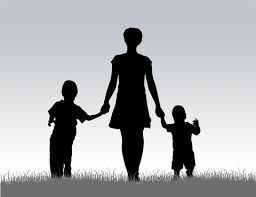 This is both an ode to single parents everywhere and a love letter to my husband.
The low-gas light on the dash was persistently, annoyingly yellow. The baby was crying. My son hovered between complaint and fear. Siri was issuing useless commands, directing me to a service station 12 km away. We’d been hurtling down the highway, in a rush to get to the ski hill on time. I’d packed the car, the kid, the supplies, the baby. I’d forgotten the gas. In a quiet panic, I pulled off and started scanning the horizon for Essos.

“Are we going to run out of gas?” Bean asked, worried eyes watching me in the rearview mirror.

“No!” I responded with cheerful scorn.

Actually, as the car juddered, I thought, “Eff! We are going to run out of gas. And this is all on me.”

It was a frazzling parenting moment that had me on the verge of tears. I was lost in the winter-wild burbs of Toronto, with both of my kids in the car, and my husband 15,500 kilometres away in Australia. This would never have happened to him. He would’ve ensured that the tank was topped up before embarking on a long highway drive to his son’s ski lesson. He would not have taken a “fingers crossed” approach to a rapidly-emptying gas tank.

Craig had been, sadly, called home to Sydney to attend his grandmother’s funeral. There was no question of all of us going. It would’ve been too disruptive to expose the kids to that next-level jet lag for a week-long journey. Craig went to support and share memories with his family, and I stayed to hold down the fort while he was gone.

I’ve done weeks of solo parenting before, but they’ve always been vacation-y, like going to the cottage for a week with many grandparent helping hands around. Those don’t count.

This was the first time that I was responsible for both kids without other adult input. I had 8 nights of dinners and bedtimes to tackle alone. Plus school drops and ferrying to activities. Plus just trying to keep on top of the mountain of household chores that seems to loom over us all, at all times. Plus having a very active and curious toddler tearing the place apart in all her waking hours. And waking in her sleeping hours.

Before my husband’s departure, I kept groaning about how hard it was going to be. Until he got annoyed and told me to cut it out. He was right. I was being overly dramatic, not to mention unfair to the millions of people who manage to solo parent with grace and style, for like, their children’s whole lives and not just one piddly week.

The thing is, if roles could be reversed, my husband would make a much better house-parent than me. He’s just good at gettin’ s*** done. He’s orderly and methodical. He always remembers to take the garbage out and he alwaysmakes our oatmeal in the morning. I had to remind myself ten times to take the garbage out and managed to let the oatmeal pot overflow. On two separate occasions. And then I didn’t wash the crusty pot until night-time. He’s domestic. I’m barely domesticated. Unfortunately, his earning power dwarfs mine, so he’s got to be the bacon-bringer and I have to be the bacon-cooker. But then I get distracted and let it burn.

I see some of you rolling your eyes. Week in and week out, you manage to get the job done, I know. I decided to take a leaf out of your book. I wasn’t going to do it alone, though.

A lesson I have finally, finally learned in life – though it took years to sink in – is that if you want help, you have to ask for it. You have to really, quite specifically, ask for it. The world is full of wonderful people, but there are very few who are going to telepathically intuit exactly what you need, and swoop in to give it to you. There have been many occasions over the last six years in which people have offered me help. Through pride, ego and inertia, I’ve rarely accepted these offers of assistance. I’ve found myself, struggling alone, often in very difficult circumstance. The other piece of the Help Lesson is that if you want help, you have to say yes when people offer it. Two things:

My best friend offered to have us over for Sunday dinner. Yes.

I asked Bean’s uncle and auntie to take him to his skating lesson on Monday. Ask.

I asked my good friend – a full-time solo parent – if we could have pizza dinner together on Wednesday evening. Ask.

I engaged the services of our caregiver extraordinaire on Friday. Ask.

My other best friend, also running a solo gig, offered to come over and keep us company. Yes. I asked her to join us for a dinner which I would purchase, not cook. Ask.

I created a friend barricade and felt blessed. There were challenges: missed appointments and social events, a sore throat, some sleepless nights. The biggest difficulty lay in finding alone time for my son, when Lark’s bedtime demands stretched on for hours. I’m afraid that Bean spent a lot of quality time with the iPad over the week. He missed having his usual undivided parental attention at bedtime. He missed his Dad as he tearfully told me about how his friends at school weren’t interested in the Wallabies jersey he wore for Australia Day. I missed my husband as our baby clutched my phone and talked to him on Skype, “Hi!!!! Dada.” Pause. “Hi!! Dada.” Pause, repeat.

I didn’t run out of gas. I made it to the service station just in time, no thanks to Siri, that incompetent nitwit. Bean got to go to his ski lesson – only ten minutes late!

We welcomed Craig/Daddy/Dada back with fresh perspective and renewed gratitude. For making the oatmeal. For the garbage. For filling up the car. For all the thankless tasks that keep us on the rails, week in and week out.

Dedicated with love to Craig’s Nan – may she rest in peace.