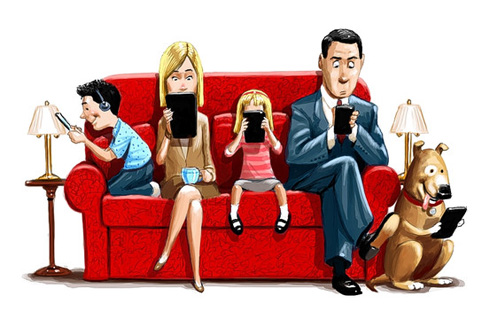 A few weeks back, I was hiding in my bedroom, trying to find ways to free up storage on my phone, which had reached capacity and was in a feeble state. I heard Bean looking for me around the house, while I continued tapping away at my device, in stealth mode.

“Mum! Muuuuum. Where are you?” He bounced into my room and saw me holding my phone. “Hey!” he said accusingly. “Isn’t this supposed to be screen-free Sunday?”

It was. It was our very first screen-free Sunday – a family initiative that I had announced to general groans the previous week. The other household members were doing pretty well with this new thing, but I was failing miserably at it, as I just needed to do one more thing on my phone. All the time.

“What IS a screen-free day?” you might ask. There are a few iterations on this theme: screen-free weeks, social media detoxes, screen breaks, etc. Basically, it means taking a break, (of some pre-determined period) from screens in all their forms. Phones, iPads, TVs, video games, and so on. I knew that a screen-free week wasn’t realistic for our family, but I imagined that a full Sunday would be a refreshing break from being nose-down in some sort of tech all the time.

The first thing that I hoped to gain from it was to back my daughter off of her Paw Patrol habit. Every morning, she asks to watch Paw Patrol before she even eats breakfast. Even though we have a hard and fast rule that we don’t watch any TV before school. I know why she thinks I’ll suddenly relent though, because to be honest, depending on the day, I sometimes allow her to watch 2 or 3 episodes in a row – in the afternoon. This is usually when I’m desperate to get something done and having her absorbed in a show is a welcome break from the unceasing two-year-old-ness.

The last few Sundays have been kinda great when the kids have wanted to watch some telly, and we could be all, Sorry, no, it’s screen-free Sunday. And they were like, Awwwww, okaaaaaay. On the flip side, after the kids went to bed, Craig and I realized that we couldn’t watch our show on Netflix either because…it’s screen-free Sunday. So, one Sunday night, I ended up reading a chapter of The Magician’s Nephew with Bean and then fell asleep. At 9:45. For once, I got 8 hours of sleep instead of my usual 6.5.

Realistically though, the kids’ TV habits are the least of my problems. The world and the technology we now use daily is so different from what it was even 10 years ago. About a month ago, Lark called me over to where she was playing. “Do you want to watch a video on my phone?” she asked me, holding up her hot pink plastic smartphone. Thankfully, it doesn’t light up or make noise, except in her imagination.

“Sure!” I said. “Who’s in this video?” “Me and Ginger,” she said. “See?” She tapped the fake screen with one small finger. We both pretended to watch it for a moment, and then she moved on to a different game. On another occasion, she brought the phone over to me and asked, “Shall we FaceTime with Bubby?” Almost every day, she – relentlessly – asks to look at photos on my phone, play iPad, watch children’s clips on YouTube or check out videos of her and her brother.

These are the realities our children are growing up with. Hundreds of videos and photos of themselves to view whenever they like. Every episode of every show that they love on demand. All of their video games available to play for as long as they want. None of this pay-25-cents-then-you-die crap that we grew up with.

As much as I may lament, or at the very least, ponder the implications of all of this for my kids, the next obvious question is: What about the adults?

What’s happening to all of the grown-ups who spend more time each day doing stuff on their phones than, well, anything else? Who did my daughter learn from that a smartphone is such an endlessly fascinating device?

Recently, on the same topic, I heard an interesting interview on CBC Radio’s The Current, with Adam Alter, the author of Irresistible: The Rise of Addictive Technology and the Business of Keeping us Hooked. Alter explores how addictive technologies like social media can be destructive to our human interactions, and also what we can do to create some distance from them.

Personally speaking, I’m completely addicted to my phone, and I’m well aware of that. Hence, screen-free Sundays. I’m sure that many of you can relate to that feeling, half-panic, half-despair, that you have when you think you’ve left your phone at home. And then the consequent rush of relief when you realize it’s actually in your bag. I don’t even want one of those apps that tells you how many times a day you’ve looked at your phone or whatnot. Because, yeah, it’s a lot.

I’m not making an argument for chucking our phones out and returning to Morse code and carrier pigeons. The Internet is amazing and I can’t imagine living without it. Our devices enable so much ease in our lives, as one Sunday when I used my phone to book an Uber to go to my parents’ house for my niece’s birthday party. I’m trying, though, to create a little mindfulness around using it, rather than picking it up all the time as an instinctive, knee-jerk reaction to boredom. My husband and I mock each other when one of us pauses a show to get a drink, and the other immediately picks up his/her phone, because the Lord knows we can’t be alone with our thoughts for an entire minute and a half.

Okay, we do bend the rules of screen-free Sunday for certain things: when we need to Skype Australia, check the weather, quickly reply to a text message, or order an Uber as mentioned above. If we are doing something memorable, then we’ll use our phones to take photos. And quickly post them to Facebook or Instagram. Just kidding. I do that on Mondays.

For the most part though, we have to pick up the phone, not get distracted by it, and complete the task at hand. Sundays make us more thoughtful about using screens. We all have to find other things to do, together and alone, so we’ve been doing more reading and playing games. And even better, getting more sleep.

During that 20-minute Uber ride to north Toronto, I couldn’t sit there and scroll through various feeds, or text people, or put things in my calendar, or whatever it is I do all the time on my phone, so I chose instead to stare out the window and just be. My driver was skimming through an oldies playlist, and I Only Have Eyes For You by The Flamingos came on. Spring sunshine was streaming in, I was relishing the quiet of being alone without a small person clambering on me, and I had one of those dreamy moments where a song on the radio becomes the perfect soundtrack to your day. Everything seems to blur around you, as you really notice a song for the first time, although you’ve heard it many times before.

With my phone in my hand, that moment would have been lost.

For more on this topic: