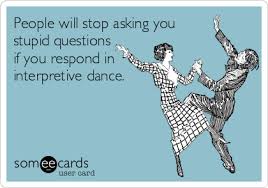 We’ve all been on the receiving end of nosy questions from perfect strangers. Right? Personally, my life is a mostly-open book – I mean, I write a blog about me and my family that is read by actual dozens of people, so obviously I’m not averse to sharing. But, even I have wondered what is going through other people’s heads when they inquire about some intimate detail.

In the age of the overshare, there are still some things you just shouldn’t ask other people – particularly, strangers. We’ll start things off with the basic stats: “How much do you weigh?” “How old are you?” “Have you ever had plastic surgery?”  Fact-seeking inquiries all, yet questions about our physical properties are considered rude by most people over the age of 12.

Moving on, direct questioning about finances: “How much money do you make?” No need to elaborate. For most of us “not enough” suffices as a response.

So, those are bad. But what’s the absolute worst question you can ask someone? You know. If you’re a woman, you know. The worst. Wait for it. Drumroll. Ready?

I hope I’ve never actually asked anyone this. I tend to err way on the side of caution on this one, even when I’ve just encountered a woman rubbing her giant watermelon belly, and lamenting her cankles, I probably won’t bring it up unless she does. Because, what if she has some insane glandular condition or similar? What if – gasp – she is pregnant but she’s one of those women who doesn’t know that she’s pregnant, until she goes to the hospital and the doctors inform her that it hasn’t been digestive trouble but in fact a small human that’s been bothering her all of these months? (You may laugh but I’ve known in my lifetime two women that this has happened to.)

I have an unfortunate amount of personal experience in fielding the are-you-pregnant query, which is why it’s my policy to keep my mouth shut when faced with a suspiciously rotund abdomen. If Possibly Pregnant is a friend of mine, she’ll eventually tell me in good time. She has her own reasons for keeping it quiet. And if she isn’t a friend of mine, then, obviously, it’s just none of my business, is it?

I’ve been asked this question a total of three times. The first time was definitely insulting, but not meant to be hurtful. Perhaps I’d been eating a lot of bread? The inquirer genuinely thought that I had that special glow. In fact, being pregnant was THE furthest thing from my mind or uterus.

The second time broke my heart. I found myself walking away from the person who asked me, with tears in my eyes. This, I thought. This is why you don’t ask.

The third instance – which was actually the second time – was a communication breakdown of the finest calibre.

Long ago, when I taught ESL for a living, I’d just started working at a private language school in downtown Toronto. The majority of the classes there were mixed-demographic, meaning that the students came from all over the world and ranged in age from teens to retirees. Because of that, teaching these classes was challenging, but a lot of fun. Throw some Brazilians, Koreans, a smattering of Europeans and a couple of Saudis in a classroom together and hi-jinks will inevitably ensue.

A couple of weeks after I’d started there, a school group of teenage girls arrived from Japan. For reasons unknown, the director decided not to disperse these students amongst the regular classes, but to segregate them in a group of their own for the few weeks of their stay. As the newest hire, I was volunteered to teach this group of giggling school-girls, who were around 16 years old. And they were quiet. Very, very quiet.

I was tasked with teaching them to speak English, but getting them to actually form words proved to be a formidable task. My most “fun” lesson plans crashed and burned, and without the usual different nationalities to balance things out, our Conversation classes resounded with the gentle chirping of crickets.

One day, I mentioned in passing that I was engaged. This information galvanized my class. They actually applauded. They wanted to know everything about my future husband and our wedding plans. This was the most I’d heard from them in weeks.

At any rate, the girls put their heads together and came up with something they wanted to ask me. Calling me over, one of them looked up at me, smiling and asked hesitantly, “You and your fiancé…um,” and here she paused, pointed at the dictionary and read out the words, “Shotgun wedding?”

It took me a moment to twig to what she was asking.

Then I realized that she thought I was pregnant. I flashed through several emotions in quick succession ranging from irritation to amusement – I mean, it’s hilarious, right, SHOTGUN WEDDING?? I could only turn to her and simply say, “No. I’m not.” She blushed beet to her hairline and gasped out an apology between giggles. I imagine that the phrase she chose in Japanese was rather more polite than the English translation, which conjures up images of a rifle-totin’ dad forcibly marching his future son-in-law to the altar.

Nothing more was said. I was used to students from other cultures thinking that I was fat, so I let it go. During the break, I relayed this story to my co-workers, who fell off their chairs laughing whilst examining my stomach for signs of a baby bump.

The girls eventually went home to Japan, hopefully to go on to even more scintillating English conversations like the ones we had together.

For a little while, shotgun wedding became code amongst the teachers for any communication snafu or epic lesson-fail.

If you’ve read to the end of this tale, here’s a simple infographic on the topic to take with you: When I was about 10 years old, this kind-of-epic event occurred in our family. My parents went away for around four days, and my grandmother flew in from Toronto to watch me and my two hellion siblings for that half-week, as we lived in New York state at the time. She cared for us well, and we all survived, despite the fact that she almost drove our enormous, 80’s, maroon station-wagon off of the road on a couple of occasions.

My parents went to the Caribbean for the first time, and they came back with stories of impossibly turquoise water and swarming-rainbow fish. Mom and Dad were both relaxed, giddy, and laden with souvenir T-shirts for us kids. Looking back, they weren’t just jazzed about their first trip down south, it was also their first getaway from us, their darling children.

Yes, my parents had not both spent a night away from the kids in 13 years of marriage.

I bring this up because Craig and I celebrated our 10th wedding anniversary last month. (Thanks, it’s a nice, round, number.) Of course, like most couples these days, we’d spent a fair bit of time together before getting married, so it’s actually been 15 years, but who’s counting? Our relationship has spanned the journey from our youth at 24:

Quite a few people around us also happen to be celebrating their 10th anniversaries, with varying levels of hoopla and big gifts. Good friends of ours organized their first getaway from the kids after ten years of marriage, and strongly encouraged us to book something too. It was amazing how much we managed to do in two days, they said. When we wanted to go somewhere, we just walked out the door and went, without having to organize all these diapers and sippy-cups.

With this glowing report of uninterrupted conversations in mind, I booked a one-night break for us that took place last weekend. It was the first night that I had spent away from Lark since she arrived on Earth, and I was fearful as to how she would react to having a sleepover at my parents house. Would she be inconsolable, weeping for Mummy all night? On the contrary, that afternoon I received video footage of her dancing with my niece, garbed in a sparkly tutu and shouting, “It’s party time!!” That’s my daughter. When we picked the kids up to go home, she cried the whole way, begging to go back to Bubby and Da’s house. My son was equally unperturbed by our brief separation, as I imagined he would be, given that he is now 8.

Our overnight stay was fab. We went to a spa and lounged in hot tubs, we drank bubbles, looked in shops, had a hike, an enormous dinner, got a massage and had a lunch in a country pub. Not necessarily in that order. In 24 hours. There was no screaming or bickering or refusing to get into car seats. There were no demands for snacks and sudden pleas for water. We just did stuff without a lot of fuss. It was insanely liberating. And we talked about other things. Things that we used to talk about, like music and books and current events and articles we’d read. Things which were not reports of the weekly schedule and who has to do what when, and requests to fold the laundry or pick up milk on the way home. Things which were not shouted at each other in an effort to be heard, over the constant cacophony of our loudmouth offspring.

We’d realized not too long before that it had been four years since we last spent a night child-free. How did that happen? It wasn’t that we didn’t want to have a short holiday without them, but Time just somehow gets away from you, and before you know it, you’re reminiscing about your honeymoon on your 20th anniversary. It strikes me as so very essential to the success of a relationship to be able to spend time together, apart from the children, yet finding that time can prove elusive.

Timing and life make it not always possible to get away from the kids. We won’t always be able to find the funds for overnight escapes, and not everyone has someone in their life with whom they can leave their children for the night. Which is why I propose mandatory, government-sanctioned and sponsored child-free holidays, complete with registered overnight care. They must already have this in France, oui?

After 15 years, let’s face it, many marriages are foundering on the rocks. Couples come unstitched at the seams for a variety of reasons: work, money, careers, compatibility, affairs, stress, illness and renovations. I mean, God, if Brad and Angelina couldn’t make it, can any of us really expect to?

I’m obviously not a marriage counsellor, but here are a few things that I think are good ideas when trying to keep it all together:

Ten years – hell, 15 – have gone by fast. In another ten years we’re going to be parents to teenagers, and ten years after that, we’ll be 60, with tonnes of time on our hands, and we’ll be sighing, and wondering what the kids are up to tonight.